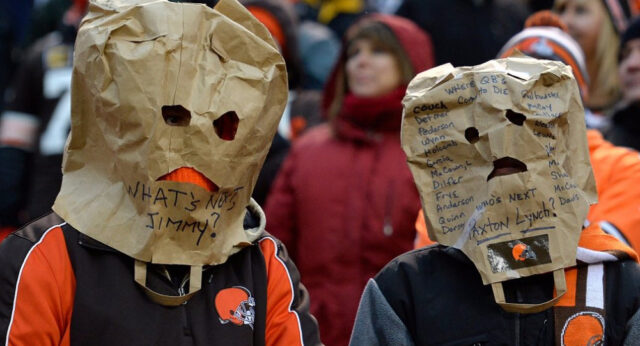 Regarded as the worst team in NFL history the 2008 Detroit Lions went 0-16 which is today considered the worst record in NFL history.  Right now the Cleveland Browns are 0-13 with the last three games being against tough opponents. One interesting tidbit of information is that the Detroit Lions won all of their preseason games while the Browns lost all of theirs.  Check out the next 3 games on the Browns’ schedule:

The home game against the Chargers will probably be their best opportunity to win.  Early in last weeks game against the Panthers they lost Melvin Gordon for an undetermined amount of time.  It will be interesting to see if he is back by the time they play the Browns.  Playing at Buffalo and Pittsburgh in the middle of December/January is probably not going to be a good situation for the Browns. Anyways, let’s just assume that the Browns will lose their last three games by their average scores and compare them to the Detroit Lions. We will begin with points per game.

These results just tell me that the NFL is much harder to win all of your games.  You almost never see undefeated teams at the end of the season.  The NFL takes pride in the fact that there is not one single dominating team out there.  Every season you see different teams in the playoffs.  The same cannot be said for the other major sports leagues in America.  In the NBA you have the Golden State Warriors, Cleveland Browns, San Antonio Spurs, Oklahoma City Thunder…and that’s about it.  In baseball its the Red Sox, Yankees, Dodgers, plus maybe a handful of other teams.  Hockey is the same way.  None of this has anything to do with the original question which was, “Which team is worse?”  Well the Detroit Lions have definitely lost by a larger margin I would almost say this goes as a tie for the most part with a slight edge being given to the 2008 Lions squad.  Maybe it’s the strength of schedule that could help us determine a clear winner:

* denotes only 13 games have been played this season so far
This would lend the advantage to the Cleveland Browns right now by around 5 games over an entire season. We will revisit this question at the end of the season but I think it’s safe to say that this is going to be a close race to the finish. How sad is it that the worst two teams in history both will have happened in the past 10 years. To think that the NFL wonders why their ratings are taking such a hit this season. Duh.