The game was never really even close.  This NFC Championship game which was in a dome in Atlanta was not even close from pretty much the beginning of the game. At the end of the first quarter it was 10-0 Atlanta and by halftime the game was already over. 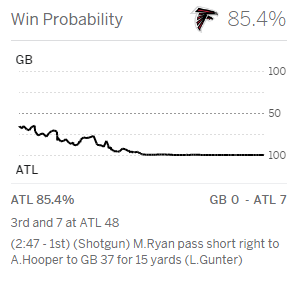 Thank goodness I recorded it because I didn’t actually get home until halftime and it was already 24-0.  You may not think that the game was out of hand by then but ESPN certainly did giving the Falcons a 99.4% chance of winning at halftime.  I kept hoping that the Packers would find a way back into the game but the second half really was more of the same thing.  After jumping out to a 31-0 lead in the third quarter the Packers finally started scoring some points.  The game actually ends up looking pretty decent for Aaron Rodgers and the Packers as they really only lose 44-21 in the end but the score does not reflect just how dominate the Falcons were throughout the game.  I believe if they had scored one more time to make it a 38-0 game you would have seen the second string in for the most part.  That’s how sad this game was basically until the fourth quarter when it looked like Rodgers would try to make a miracle happen.  Matt Ryan ended up with 392 yards passing with four touchdowns to go with it.  He actually ended up with 415 total yards and was responsible for five touchdowns in the game which has got to be close to a record of some nature (at least in conference championship games).  The best news for the Falcons is that they barely had to use their running game as both running backs were used less than 15 carries each.  Julio Jones had nine receptions for 180 yards and two touchdowns.

The problem that the Packers ran into is that they rely almost exclusively on Aaron Rodgers for offense.  He led his team in passing and rushing.  He was responsible for every touch down and even had half of the total rushing yards in the game.  Montgomery was injured and Christine Michael just could not get the job done against the Falcons defense.  Rodgers got tossed around like a rag doll most of the game by the Atlanta defense but was still able to make some places.  He was sacked twice and got hit hard on seven difference occasions.  If you look at the Atlanta defense you will see that over 10% of all tackles were behind the line of scrimmage, they deflected seven passes, got to Rodgers nine times hitting him every time and tackling him twice.  All in all this game was not close at all.  In terms of helping the poor ratings all season, it will be interesting to see what the final numbers are from this game.