North Carolina men’s basketball has had it’s up’s and down’s this season but this loss to Miami smacked of their National Championship game a couple of years ago in which they lost in the final seconds after hitting a last 5 seconds shot.  It’s hard to believe that this could have to a team twice when it’s so rare that it happens once.  North Carolina should have no issues making the tournament at this point but Miami almost surely punched their ticket with a win last night. 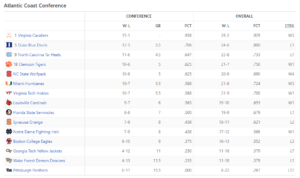