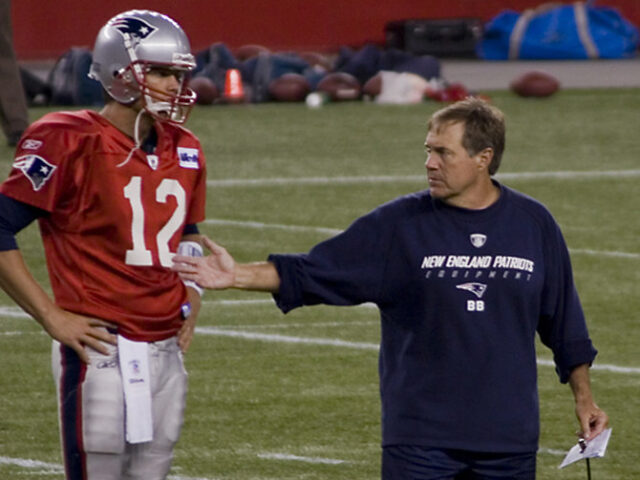 One of the most controversial questions in NFL history will most likely be answered over the next couple of seasons. Who deserves more credit for the six Super Bowl championships in New England…Bill Belichick or Tom Brady? Is it the game plan and defenses that were created by the coach or the leader of the offense that deserves more acclaim? My gut tells me to go with Tom Brady only because he is actually on the field making plays and keeping them in the game but there are plenty of people who would argue that the coach deserves most of the praise in this case. That question will now be answered as Tom Brady has officially signed with the Tampa Bay Buccaneers. So, how does this question get answered? The short answer is really whoever wins a Super Bowl first. A much longer answer will most likely be answered by Bill Belichick. Unfortunately Tom Brady is put between a rock and a hard place.

Tom Brady Is A Buc Now

The Tampa Bay Bucs have honestly not been that great since 2007 when they made the playoffs last and lost to the New York Giants. You could argue that they may have been better in 2010 when they went 10-6 but missed the playoffs. Tom Brady has his work cut out for him competing with the likes of the Panthers, Saints, and Falcons twice a season.

Their opponents went 127-127 which puts them in the middle of the pack in terms of strength of schedule. I would say that considering they played three games this past season where the opponent would eventually win 13+ games it makes the schedule look a bit harder. Any time you have to play the New Orleans Sains twice a season though it’s going to be rough. The potential Drew Brees vs. Tom Brady match-up is going to be one epic journey this next season and I am anticipating some great games. Honestly from an offensive perspective this Bucs squad is in this writer’s opinion a much better option for Brady who is getting older by the minute. They should be investing more in the offensive line though. The official schedule comes out on April 17th but honestly look for it to not change a whole lot this season. It would be cool to see Brady come to the Cowboys Stadium again and would be much easier for me to see him play that way.

Excited, humble and hungry …if there is one thing I have learned about football, it’s that nobody cares what you did last year or the year before that…you earn the trust and respect of those around through your commitment every single day. I’m starting a new football journey and thankful for the @buccaneers for giving me an opportunity to do what I love to do. I look forward to meeting all my new teammates and coaches and proving to them that they can believe and trust in me…I have always believed that well done is better than well said, so I’m not gonna say much more – I’m just gonna get to work! #Year1 p.s. Jack Brady with the photocred 😀

At the same time Bill Belichick has a pretty easy road every season. He plays in a much easy division so he will be more likely to make the playoffs on a regular basis. The next two seasons are really going to show just how important Tom Brady was to the team and less about how good the game plan is. If he is able to plug and play a Quarterback into the game plan like he did with Jimmy Garoppolo then it’s more likely that Tom Brady loses some luster to his name.

The Case for Bill Belichick

Honestly this is not a hard case to make in some respect. Belichick is a mastermind when it comes to football and defense’s especially. There have been several instances when Tom Brady has suffered from an offensive perspective Belichick has been able to pull them out of the grasp of defeat with his defensive schemes. When it comes to personnel decisions there is no one better in the game at this point. He turned football into a science.

You need not look further than the 2008 Football Season for the New England Patriots to try to make a case for him. In the season opener Tom Brady suffered a torn ACL which put him out the rest of the season. This enabled Matt Cassel to take charge of the Quarterback position. It was a scary moment for Patriots fans but Belichick was able to take them to an 11-5 season with a back-up Quarterback. They did not make the playoffs because it just so happened that they ended up losing to the Miami Dolphins by like 5 more points than they beat them by. The Dolphins also ended up 11-5 which put them slightly ahead in the standings. The point is that even with a back-up Quarterback the Patriots still managed 11 wins in a season.

Combine that with the fact that ever since Matt Cassel left New England for the Kansas City Chiefs he has produced basically nothing. He has been to the playoffs once with the Chiefs losing to the Ravens in the Wild Card round 30-7. Since then he has bounced around the league playing for several teams including: Minnesota Vikings, Buffalo Bills, Dallas Cowboys, Tennessee Titans, and the Detroit Lions. This would be the biggest argument for Bill Belichick deserving more of the credit for the success in New England.

The Case for Tom Brady

To me, this case is quite easier to make a this point. While Bill Belichick had a successful season in 2008 when Tom Brady went down, his overall record without Brady is not good. I mean honestly Bill Belichick was 36-44 before Tom Brady was even a though. Albeit this was in Cleveland which by today’s standards might actually be considered good, but it’s not the stuff of legends like everyone would have you believe now. Tom Brady is 136-39 when starting in a game for the New England Patriots. That’s a 75% winning percentage compared to Belichick’s 45% (54-66) record of coaching without Tom Brady at the helm. So while the 2008 season seemed to be a successful one without Brady starting as Quarterback, you can see that Belichick has some major issues without him starting.

The intangibles that Brady brings to the table cannot be overlooked as well. His ability to think quickly on a higher level than most coaches enables the players around him to shine brighter than they would with a mediocre leader. His leadership has never been questioned and every single player who has ever played with him consistently talks about his work ethic. I mean he is still playing at a high level post 40 which very few Quarterbacks have been able to achieve in their career. He will likely play another two seasons at least and will instill a work ethic in players at the Tampa Bay facility that they have unlikely seen in their career.

While Bill Belichick’s career will most likely extend far past Tom Brady’s people 20-30 years from now (assuming the NFL is still around) won’t remember him as easily. Tom Brady will be the new Bart Starr, Montana, Namath, etc that people continue to talk about for decades to come. There will likely never be another Quarterback that will rival how many Super Bowl appearances, or wins for that matter, that he has been able to achieve. Brady also makes all the players around him better every season. You can see this with his ability to take no name receivers and make a name for them. He has had all star players in the past like Rob Gronkowski, Randy Moss, and others but for the most part he gets more done with less. My personal conclusion is that it’s not really a question at this point and that Tom Brady deserves more of the credit. I believe the facts support that conclusion as well.