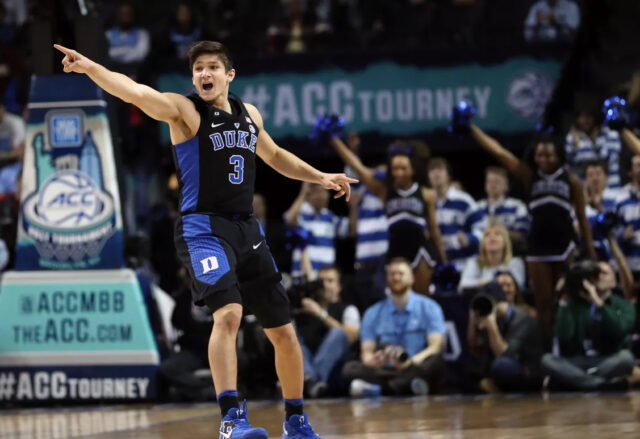 The number one seeds are out and Duke did not get one of them. Did they really deserve one though? They are coming off four wins in four days in the hardest conference in the entire country (not to mention actually winning that conference tournament with some “injured” players). One might argue that they had some help from the referees, a little bit of luck with their schedule, and have gotten healthy at the right time.  That’s probably the bitter and insane Tarheels fan inside me screaming though.  Let’s take a look at the odds for each of the top teams (which essentially is just how Vegas and the sports betters feel about it):

It’s interesting to me that the top 4 (out of the top 5) schools with the best odds are coming out of two brackets. Let’s compare all of the top seeds in the tournament and see where Duke should have fallen. All of the rankings that you will see in the Wins/Losses are RPI rankings since none of the major polls have come out with new rankings since the regular season ended.

What stands out to you when you compare all of these teams? What stands out to me for the Duke Blue Devils is two games (both losses). Those two games are against Syracuse and North Carolina State. NC State has one of the best players in the nation in Dennis Smith Jr. when he is on his game. Outside of Smith there is basically no one. They lost Kat Barber to the NBA last season and the rest of the top players transferred out. We are talking about losing to a team that had only three wins the entire season against the top 150 teams in the nation. If you compare this to North Carolina’s worst loss which was to #106 ranked Georgia Tech, the Yellow Jackets went 4-4 against top 25 teams beating not only UNC but also, VCU, Florida State, and Notre Dame. Not only did NC State go 1-6 against top 25 teams (their one win was against Duke), but they also lost to Boston College which is by far the worst team in the ACC managing just two conference wins all season.

One thing I will say is that Gonzaga is most definitely overrated and don’t let their record fool you.  The draw they got will not be very kind to them.  If they end up meeting West Virginia or Notre Dame in the Sweet 16 you can bet they will be going home early.  North Carolina looks to have the hardest path to a championship with several teams in the top 50 RPI:

In summary North Carolina has the hardest road of all the #1 seeds. Duke did not get snubbed as they got placed in the second easiest bracket with essentially home court advantage for the first two rounds. Had they been a #1 seed they would have most likely taken Gonzaga’s spot which would have honestly put them in a greater disadvantage having to deal with teams of higher caliber far away from their home court.